From consumer products to aircraft controls, to even heavy machinery controls, the applications for joysticks are far-reaching. And you’ve likely noticed a pattern to their applications. That is the “control” aspect. Joysticks function as control input devices. So, how does an industrial joystick potentiometer work? At the most fundamental level, a joystick is an input device that consists of a stick that pivots on a base. When a joystick is moved, a message is relayed to the device or object being controlled and that triggers a corresponding movement.

The earliest usage of joysticks coincided with the dawn of manned aviation. Joysticks were first used as the primary control mechanisms for aircraft elevators and ailerons to pitch and roll the aircraft as needed. They were used in combination with another control stick which controlled the aircraft’s rudders (the vertical control surface found on the vertical tail). The first known usage of a joystick was in the Blériot VIII aircraft, which was considered the first to implement both a configuration and a control system that would be the standard for the decades following. The backseat pilot in the Piper Cub shown below can be seen holding a joystick. 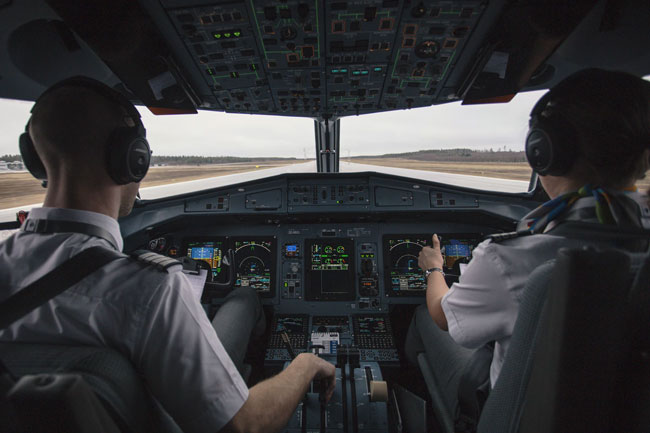 The term “joystick” is thought to have originated from another French pilot, Robert Esnault-Pelterie.

At its core, a joystick is a control device that accepts input and communicates commands to the object being controlled based on those inputs. In the original aircraft applications, the joystick was connected to directly to cables and rods that were directly connected to the ailerons and elevator.

In more sophisticated modern designs, the control stick, as the joystick is often called, is integrated into fly-by-wire systems that converts joystick input into electrical signals for the control surfaces, with no physical cable or rod involved. This is analogous to the manner in which joysticks are used across many industries. In industrial environments, joystick input is converted to signals that are sent to heavy machinery.

A potentiometer is a manually-adjustable three-terminal resistor that has a sliding or rotating contact that forms an adjustable voltage divider. It measures electromotive force by balancing it against the potential difference produced by passing a known current through a known variable resistance. In a wider sense, potentiometers fall into one of two categories: linear or rotary. However, there is extensive variation within these categories.

How Do Industrial Joystick Potentiometers Work?

As described earlier, a joystick is basically a shaft mounted on a base, upon which it rotates. If a joystick controls movement in multiple axes, it will have multiple shafts. In modern applications, the base houses a circuit which sits directly below the shafts. This circuit is also connected to contact terminals. It is through these contact terminals that the electrical signals are sent to the processing unit. In an industrial joystick, a potentiometer is connected to each of joystick shafts so that pivoting the shaft rotates the contact arm. When the stick is moved, the potentiometers’ contact arms produce corresponding turns, and hence, varying the resistance of the potentiometers. This alters the electrical current in the circuit. In this way, the potentiometer translates the stick's physical position into an electrical signal, which it passes on to the joystick port on the computer.

The computer then translates this analog electrical signal it into a digital signal, which it communicates to the piece of hardware being manipulated. The quality of a joystick is primarily measured in how seamlessly this process occurs. Smooth translation of user input to movement response is the objective of good joystick design and integration. The capabilities of industrial joystick potentiometers have far exceeded their original designs. They are now used to aid highly accurate dynamic positioning in the maritime sector and can be programmed to control the valves on an oil rig in highly sensitive operations. Joysticks are even being used in operating rooms to improve accuracy and efficiency.

P3 America is a leading provider of high-quality industrial joysticks, sensors, and control components. Our team of highly knowledgeable and experienced engineers is always ready to go the extra mile to find the solution you need. If you need a capability that our current products don’t provide, we can design and build one that does. Our customer support is unparalleled in this industry.

Contact P3 America today for more information about industrial joystick potentiometers and our extensive range of products and engineering services.